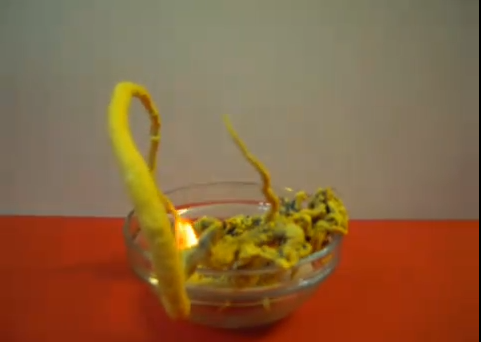 This is one of the freakiest science experiments ever.

Watch as powdered Mercury(II) thiocyanate is set on fire and turns into a bizarre alien snake like substance.

This bizarre chemical reaction, also known as “Pharaoh Snakes” was used by Victorians to dazzle guests at dinner parties and became known as “indoor fireworks”, but the reaction is extremely toxic nd dangerous.

Igniting the mercury(II) thiocyanate powder causes it to decompose into an insoluble brown mass that is primarily carbon nitride, C3N4. Mercury(II) sulfide and carbon disulfide are also produced.

Warning – All aspects of the reaction are hazardous, including handling the mercury thiocyanate, breathing the resultant gases or touching the carbon nitride “snakes”. So don’t try this at home!